Important Facts & Updates About COVID-19
Read More
Posted by Shawn Menard on March 13, 2019
This was posted more than 12 months ago. The information may be outdated.

I have so much to update you on since our last newsletter:

Did you know that Ottawa’s Official Plan is being updated? It’s the city’s primary planning document that guides our growth and development as a municipality. It will look at how we grow, what we want out of our city, and how we can use city planning to make Ottawa a better city for generations to come.

You can learn more about the Official Plan here.

And you can let the city know what issues are important to you by completing this survey.

I was very pleased to take steps to remove the beg buttons in Old Ottawa South along Bank Street. My sincere thanks to the OSCA Traffic and Safety Committee for their long and persistent advocacy for this. There was a news article about this here.

On Wednesday March 20, the urban councillors will be hosting an information session on snow clearing--which was originally planned for February 27, before having to be rescheduled. Councillors and city staff will be there to provide information about city snow clearance standards and, more importantly, listen to ideas and answer your questions about snow clearing.

You are invited to talk about how we clear our streets, sidewalks and bike lanes. How quickly we clear them. And what you would like to see out of the city’s snow clearing standards.

The event is being held in Andrew S Haydon Hall (City Council Chambers) at City Hall from 6:30 pm to 8:30 pm. It’s a free event, and you can RSVP here.

They’ll make their way over to Bank Street and head down to Lansdowne, arriving at approximately 12:00 pm. At the end of the route, there will be a St. Patrick’s Party at the Aberdeen Pavillion.

It’s my goal to make Capital Ward the safest place for active transportation in the City. One step is for the city to make street safety a priority...and you can help! Take a short survey to help let the city know that they need to do better making our streets safe for all residents. The survey is available on the city website until Tuesday March 19.

Be a Glebe Snow Mole

Speaking of safer streets, the Snow Moles have been conducting walkability audits throughout the ward to identify issues and help make our streets more navigable for people on foot.

The Snow Moles have conducted multiple audits in Old Ottawa South, and now there’s a branch in the Glebe! And on Thursday March 21, they’ll be conducting their second walkability audit.

They generally go out for a walk for about 20 minutes and then discuss their findings at the end. The whole thing takes between 35 and 45 minutes. You can read more about the Glebe Snow Moles in February’s edition of the Glebe Report.

If you want to join in this month, the Snow Moles will be meeting at the Glebe Community Centre, in the old Pantry, at 1:00 pm on Thursday March 21. Everyone is welcome to join ni.

Visit to the Ottawa Tennis and Lawn Bowling Club

In February, I was happy to visit the Ottawa Tennis and Lawn Bowling Club (OTLBC). The OTLBC has been a valued part of Ottawa since 1881 and a part of our ward since 1903, when it moved from Cartier Square to Patterson Avenue.

Currently, it resides on Cameron Avenue, just as it has since 1922.

Right now, there is a project underway to restore the clubhouse. This is a worthwhile project, and one I am happy to support. I’m eager to see what the new clubhouse will look like, and happy that this community institution will continue to play an integral part of ward life for the foreseeable future.

Tomorrow, Wednesday March 13, there will be a Public Panel on Free Transit at the Carleton University Library in Room 482 from 4:00 pm to 6:00 pm. This event will also serve as a book launch for Free Public Transit And Why We Don’t Pay to Ride Elevators. Speakers will include the book’s editor, Jason Prince, and one of its contributors, Lorena Zarate, along with Dr. Fiona Jeffries, who will talk about Vancouver’s transit movement. I will also participate, speaking about municipal politics and free transit in Ottawa.

The event is being organized by Free Transit Ottawa (who also organized the Transit Week Challenge back in February).

The event is free and you can RSVP here. 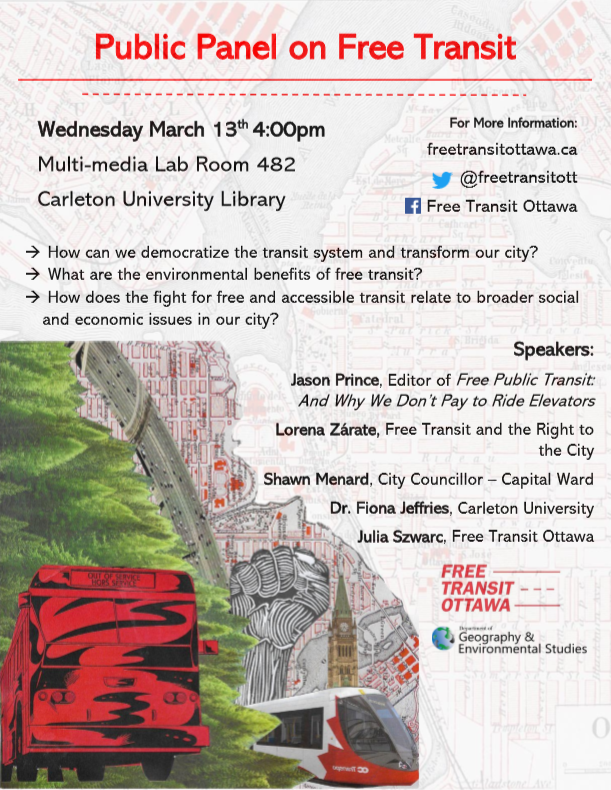 On Wednesday March 27, there will be an update on the proposed development of 99 Fifth Avenue (what’s been known as Fifth Avenue Court). There will be information and display panels about the project design, timeline of the demolition and construction, anda  preliminary construction management plan. City officials and Minto representatives will be there to answer questions.

The event will be held in the gymnasium at Fourth Avenue Baptist Church, from 7:00 pm to 9:00 pm.

Last week, after a long Council meeting, I decided that my approval for LRT stage 2 would not be provided easily. Making a monumental decision in less than 12 days, with brand new information that the public wasn’t consulted on was not something I was going to take lightly. In fact, I wrote about the challenges of this deal here and here. I, along with several other councillors, moved to defer the vote on the LRT stage 2 deal, but unfortunately our motion was defeated (you can watch me make the case for the motion in Council here). Ultimately, I voted against the deal itself, as there remain far too many unanswered questions--such as whether SNC-Lavalin achieved our City's minimum required technical score--for me to be able to vote for this deal in good conscience.

I’m happy to report that in Old Ottawa East a new crosstown Bus Route #55, will replace parts of the current Routes 16, 101, 103, and 106, and will also provide new Monday-Saturday service along Main Street to the hospital complex on Smyth Road.

Both of these changes will take effect when the LRT Stage 1 commences operations.

Ottawa continues to widen roads at will, with little evidence this does anything to reduce congestion. In fact we will spend almost double the amount on one small patch of road widening on Strandherd than we will on the city’s entire investment in affordable housing. I was happy to second a motion to receive a report on freezing transit fares as a result of continued LRT delays, but the underlying assumption in this City, that fares should keep rising for a generation, is not in line with our stated goal of increasing modal share. We need to do better in future years.

We will be discussing several important items and motions at this committee meeting including a declaration of climate change emergency in Ottawa and whether single use plastic bags should be allowed in City green bins. The meeting is being held April 16th at 9:30am in the Champlain Room at City Hall.

You can see the members of the Environment Committee here.