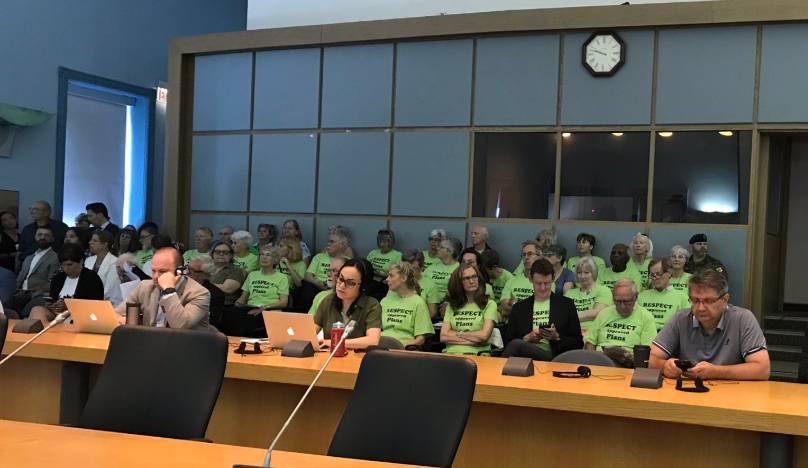 Ottawa—It’s another sad day for communities in Ottawa, as the city’s Planning Committee has abandoned a collaboratively-derived aspect of our city’s Official Plan. The Secondary Plan for Old Ottawa East was created in consultation with the community a few years ago and precludes buildings from exceeding six storeys, but the Planning Committee today approved Regional Group’s desire for a nine-storey height limit on more than 13 acres of land. They did so despite broad opposition from the community, including from residents, the Community Association, neighbouring property owners, the neighbouring university, the ward councillor and the local MPP.

“This is just an incredible disappointment for the residents of Old Ottawa East, and, quite frankly, all of Ottawa should be concerned” Capital Ward Councillor Shawn Menard said. “Community Design Plans and Secondary Plans aren’t worth the paper they are written on.

“Within one Planning Committee session, years of hard work and good-faith compromise by engaged citizens has been wiped out. It really shows you who is favoured at City Hall, and it’s not the people of Ottawa.”

Residents came out in full force defending their neighbourhood and the city’s plans. Dressed in matching green shirts that read, “Respect Approved Plans,” they spoke eloquently and passionately, demonstrating how much they cared for this issue and their city. Despite their reasoned and moving presentations, a majority of councillors on the committee could not be moved.

The vote was 8-1 with just Councillor Jeff Leiper—one of the only councillors who does not take developer donations on the Committee—standing up for residents in the community (Menard spoke to Planning Committee today, but he does not have a vote).

The issue of predictable planning and putting people before developer profits has been a controversial one in Capital Ward and across the city. Residents in Kitchissippi, Somerset, Rideau-Vanier, Bay Ward and a host of other wards have routinely fought diligently to protect thoughtful, intentional city designs, only to have the whims of development corporations carry the day.

Menard, himself, ran on the issue of reining in developer influence at City Hall in last fall’s election campaign.

“This is such a problem in our city. We’re hearing it from residents across Ottawa. They want predictable development. They want planners and developers to stick to approved plans. And they want councillors who will fight for them—not councillors who have developers funding their electoral campaigns, as is the case with the majority of planning committee. This should be considered a conflict of interest.”

The massive change to community plans will now go to City Council on July 10 for a final decision.