Bank Street: Between the bridges

Important Facts & Updates About COVID-19
Read More
When Mar 5, 2021 at 10:00am – 12:00pm EST
Where
https://us02web.zoom.us/meeting/register/tZYvc-2hqj8vE9RZNYrFHECFUBMxIyZ9EXZL
Add to:
Calendar
Google Calendar
Posted on March 1, 2021
This has already taken place.

The pandemic continues to present huge challenges in our neighbourhoods. We are organizing a collective business discussion with Old Ottawa South stakeholders, including the local community association, and operators of the commercial and communal properties on Bank St (in Old Ottawa South) at 10am on Friday March 5th, 2021.

This discussion will be focused on what measures, exclusively for Bank Street in Old Ottawa South, may be available to enhance business in the Spring and Summer of 2021. The city is considering extending options for its patio program, reduced fees, street enhancement, and the sale of goods in public space right of way. We would like to work with you to enhance the vibrancy and support for storefronts this year.

We looking forward to working together with you.

This initial discussion is open only to the aforementioned stakeholders. Public consultations may take place in future.

You must register in advance for this meeting through Zoom

After registering, you will receive a confirmation email containing information about joining the meeting.

Over the course of 2020, a successful Patio Innovation Program was developed which included a series of measures to encourage new restaurant patios and café seating, as well as retail vending in the right of way, by reducing or  waiving fees and accelerating approvals. The initiatives in 2020 were designed to be as nimble as possible, aligning to the fluctuating restrictions as a result of COVID-19. With City Council’s support and approval, the following are the several initiatives under the umbrella of the Patio Innovation Program which were implemented in 2020:

As noted above, the waiving of monthly fees for 2021 for ROW patio permits and the implementation of a Temporary Zoning By-law amendment for patios on private property was completed in 2020. On November 25, Council extended the temporary zoning to January 1, 2022.

Staff are recommending that the remainder of the above noted initiatives be extended for the 2021 ROW patio season as set out below. There are no anticipated financial implications associated with these recommendations, save and 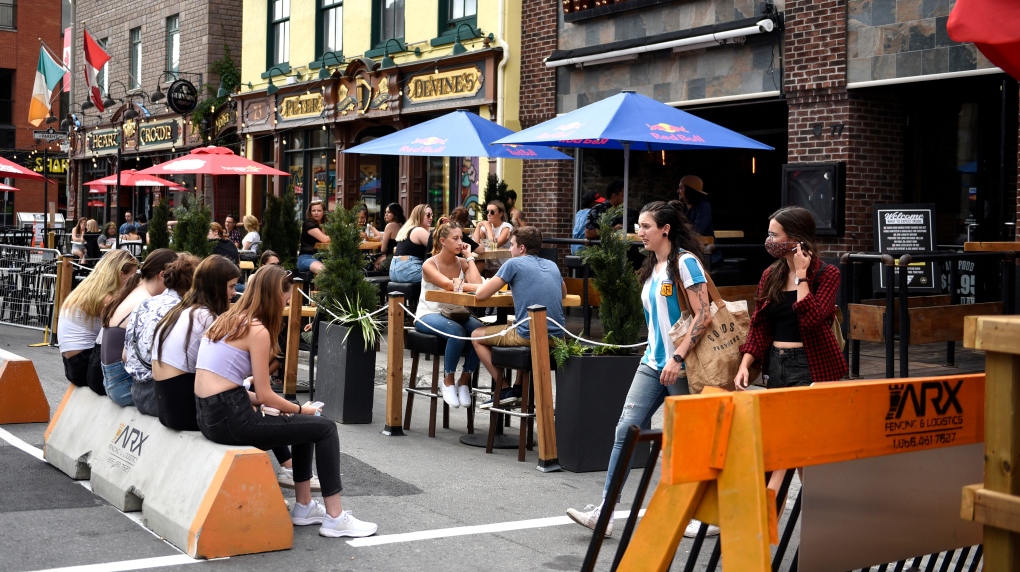 except the potential for some minor revenue from the continuation of the retail vending program, which was introduced for the first time in 2020.

One of the successful pilots that were undertaken in 2020 was the variety of road closures to support the expansion of outdoor dining. Several street closures were undertaken as pilot projects to facilitate patio expansions:

In addition, William Street from George Street to York Street was closed for the season to facilitate physical distancing as part of a continuing public realm pilot project from 2019. Bank Street from Queen Street to Catherine Street was closed every Saturday for the month of July to facilitate physical distancing. This pilot, led by the Bank Street Business Improvement Area (BIA), proved to be so successful that the BIA extended the Saturday closures until the end of September.

In anticipation of the summer ahead the Bank Street BIA has put out a survey that floats the idea of extending the closures for two or more days for summer 2021.

Read the full staff report on the Patio Innovation Program here and a slide deck from the presentation can be found here.

How Bike Lanes Can Help Business

When bike lanes are proposed for a city’s busy, commercial streets, there are often concerns about what the effect will be on business. It’s a reasonable concern. There are questions about parking availability and the effect on traffic flow. Especially in the context of the pandemic, we shouldn’t want to do anything that will make life more difficult for businesses.

Thankfully, there is a lot of research on the effects of bike lanes from cities in Canada, North America and throughout the world. After spending much of the last decade studying the

results, it has become clear that making improvements to the bicycling and pedestrian infrastructure of a shopping district provides a net positive effect on business.

Basically, bicycle lanes are good for business, even if it results in the loss of some on-street parking.

In Toronto, the city partnered with Moneris to see what would happen by putting in bike lanes on Bloor Street (a street quite similar to Bank Street). The result: more people spending more money.

Last April, Portland State University released a study of 14 corridors in six American cities and they found that “bicycle lanes can actually improve business. At worst, the negative impact on sales and employment is minimal.” From Toronto to Portland to Dublin to Auckland, the results have consistently come back that when you build a bike lane, the customers will come.

We have evidence that this would hold true in our neighbourhoods. In a recent survey our office conducted about snow clearing, of the respondents who were forced to drive more in the winter, 41% said that the increase in driving led them to shop at local businesses less, while 61% said they frequent local business less in general due to poor winter maintenance of transportation infrastructure (with sidewalks being cited most as the worst maintained).

With traffic volumes down and with businesses needing a boost, we believe that a city run pilot program for increased pedestrian space and/or bike lanes on Bank Street are worth considering. We know these things tend to help business, so we want to see whether they can help businesses here.

An annotated, chart-filled review of 12 studies from around the world.

The article by Bloomberg presents an annotated, chart-filled guide to every major study conducted about the business impact of converting on-street parking into bike lanes. Collating the studies was aimed at settling business owners’ fears that such conversion will lead to financial losses.

Bike lanes come with their share of claims and controversies; beloved by some and bemoaned by others. But research suggests bike lines in urban areas can give businesses a boost.

Of course it makes intuitive sense that active transportation users and bus commuters would frequent retail businesses more often than those constrained by vehicles. But it is always better to hav…